A Quickie with Melody Sweets

November 30, 2010
No comments yet
Articles & Interviews
Melody Sweets is one of the sweetest people in burlesque, and that’s saying something! I’ve known her since the days when I hung out with The Toilet Boys (I appear in their videos for “Future is Now” and “Another Day in the Life”) at Squeezebox, and used to watch her perform burlesque in The Bombshell Girls’ show at Suite 16. She’s a multi-talented lady–she not only, like most burlesque performers, creates her own costumes and routines, but she writes and records her own music as well! 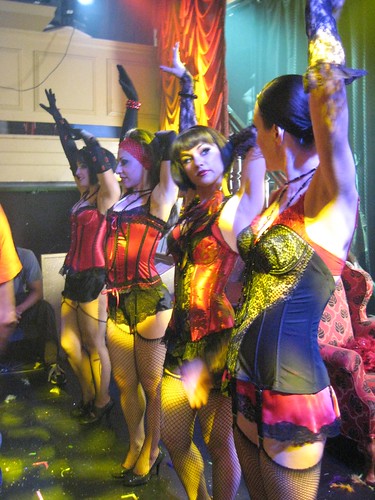 How did you come to be a New York performer?
When I first moved to NYC I knew I wanted to sing & started singing right away. I started singing at open-mic nights, making my rounds in drag shows, lesbian cover bands & rasta metal nights… crazy combo, I know! That’s NY for you. I QUICKLY got tired of being in the background, singing other peoples songs so, I created my own band with the boys of GOODFINGER. After a year of touring & finding our sound we decided to stop playing live shows to concentrate on the recording of our debut album, Killing With Kindness.

I missed the stage tremendously! I felt I needed to be up there, constantly honing my skills. I was afraid if stopped performing for any extended period of time that I wouldn’t get back up there again. I thought I’d get cold feet. Luckily, I had a few friends who had me previously addicted to glitter & rhinestones who asked me to be a part of their burlesque show & it clicked! I wrote a couple songs that made we want to take my clothes off… & Voila! Slice of Heaven, Troppo Vino & Marry Juana were born. 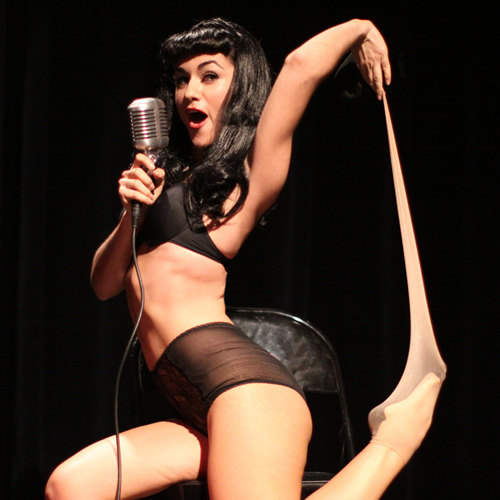 I met you at Don Hill’s in the 1990s! Then I saw you doing burlesque with the Bombshell Girls at Suite 16. Did you expect burlesque to become such a big part of your career?
Whoa! You must’ve met me when I first got here in 1999! NYC was a different animal then. I partied. It was 1999. I remember doing my very first burlesque act ever with the Bombshell girls. Back then I didn’t even have a Burlesque name! This was pre GOODFINGER! ….Not that Melody Sweets isn’t, of course, my natural given name. I loved the freedom. I loved collaborating & creating with friends who inspired me….. but my early days in burlesque with the Bombshell girls was short lived. At the time, I was dating someone that didn’t approve of what I was doing & I allowed myself to believe the things he would say & to be honest, I wanted to sing & hadn’t yet made the connection that I could do both burlesque & my own music… and, since I’ve never met anyone who has done this before, it was even more difficult to imagine doing this as a career.. or shall I say, way of life!…. & so, Burlesque took a ‘time-out’ while I concentrated on my “serious” band GOODFINGER. Little did I know Burlesque would come back to get me, and I’m so glad it did! It’s opened up a world of doors for me. Personally & professionally. …. to my surprise.

Tell us a bit about what it’s like to write your own music, perform to your own songs, make your own costumes, and create your own numbers.
It’s AMAZING. I wouldn’t trade it for the world. I’m a bit of a control freak so to be able to be in charge of everything from the ground up is amazing. It does seem to take me a bit longer to come up with new acts because I’m doing my own music. …before I can even get to the designing or making of a costume or the act, I’ve got to get a song written, recorded, mastered & copyrighted. It can be very frustrating at times, but the pay off is worth it. It took me more than 2 years to record Slice of Heaven, (maybe even more), but it’s one of my most requested acts still today. Slice of Heaven has been running at The Box now for over 3 years & is now a music video making burlesque herstory.

No performer has ever starred in, written & produced her own music video before! What are some of your other projects?
What else is out there? I’m looking to finish my debut album soon which features musical guests The Dap Kings (Amy Winehouse, Sharon Jones) & hope to do a little more traveling this winter, hopefully surrounded by my band & fellow performers. You perform a lot at the Box. Tell us a little bit about that!I love The Box. I’ve been with them since the beginning & simply love to perform there. The lighting technician is amazing…. his lights alone are a show! The sound is always great, which means alot for a singer, & they treat me well. The Box has also been a big influence on me to push myself even farther in terms of performing, music & costumes. They keep me on my toes & keep me inspired by the many different types of performers they showcase. Oh, and the fact that I’ve been able to perform for celebrities who have inspired me throughout the years such as STING. He likes to give mojo bear hugs. 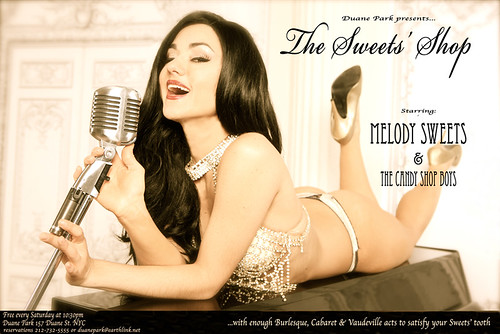 Tell us about your show at Duane Park.
It’s a blast! Every Saturday at 10:30pm my fabulous band, The Candy Shop Boys & I present the best in burlesque, cabaret and other Vaudeville-style variety acts. There is never a cover but we’re always packed so I recommend reservations. The food is out-of-this-world good & a great place to bring a date, your family, your spouse, mistress or all of them together! … we’ll make it a party! We’ve got some amazing performers coming in the next couple months from all over .. Kitten DeVille from L.A., Tatah Dujor from Florida, Annette Bette Kellow from London. And, of course, you Jo! It’s getting some great press right now.. Time Out calls it the “Swankiest”. …yeah baby. September 18th will be the start of an all new Sweets’ Shop show so I hope to see you then!

You recently produced your video and DVD. What was that like? It looks like a big party!
It WAS a big party! (It better have been! We went through an UNBELIEVABLE amount of champagne that day! …I figured I’d get ’em all drunk for breakfast, seeing as though we only had 5 hours in total to set up, record, & break down.) Everyone knew each other, it was a cast of about 15, plus tech & crew which brought it to about 25 people to organize. Everyone seemed to feel completely comfortable.. (which is good because it got pretty naughty!!) I loved every moment of it. I was overwhelmed by the feeling of community, love & support during the filming. Not only are the most amazing NYC performers in the cast – MsTickle, Julie Atlas Muz, Amber Ray, Stormy Leather & lots more…..we’re all friends that have been brought together in this fabulously shiny world. Who knew there were others out there that felt the need to pile glitter all over their bodies and bare all to the world? A special breed, indeed.What is your ultimate fantasy show? That is a loaded question! I have so many different scenarios I’d like to see played out. Hopefully I’ll get at least 9 lives to make it all happen. But, for a start, a common thread through them all is big props, big stages, big bands… maybe even orchestra style & BIG audiences. I’d like to see people leaving my shows inspired, with personal walls broken down.

What do you have planned next?
I have a big show coming up on Sept 9th at Le Poisson Rouge called Melody Sweets & the ladies of La Rouge Coquette! featuring some of my favorite burlesquers Angie Pontani, MsTickle & more! I hope to see you there Jo! We’ll be showing a sneek peek of the UNcensored version of Slice of Heaven before it’s official release in the fall.

You can hear her music and buy the uncensored version of her DVD at www.melodysweets.com.

Your ticket for: A Quickie with Melody Sweets

A Quickie with Melody Sweets