A Quickie with Karen Abbott

April 6, 2011
No comments yet
Articles & Interviews

I’ve had tons of fun with Karen Abbott, whether it’s been when she’s jumped in to help at a student showcase at the Slipper Room, or doing a grand event at the New York Public Library. She’s always playful, smart, and hotter than a biscuit. I was thrilled to have the opportunity to interview her about her newest book, a biography of Gypsy Rose Lee. Her first book, Sin in the Second City, was a fascinating insight into Chicago’s notorious Everleigh sisters and their high-end brothel. Karen manages to make her intensely researched documentary work read like great fiction, and you can feel her enthusiasm for her subjects on every page. I knew her approach to Gypsy Rose Lee would be equally iconoclastic and vivid.  –Jo Weldon, Daily Burlesque 03.29.11 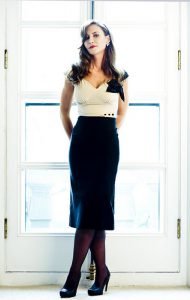 You’ve chosen some spicy subjects for your books, and write about women who’ve been entrepreneurial from the margins of society. Do you find any similarities between the sisters and Gypsy Rose Lee?

Both Gypsy and the Everleigh sisters were very crafty, enterprising, relentlessly self-inventing women who overcame difficult pasts to achieve great success. I have similar ways of describing the women. I’ve called the sisters “a 19th century amalgamation of Martha Stewart and Madonna,” and I’ve said that “if Lady Gaga and Dorothy Parker had a secret love child, it would’ve been Gypsy Rose Lee.” They were all forward-thinking and revolutionary in their own ways. They were always the smartest people in the room.

What were some of the differences in doing the research for the two books?
In some ways, Sin in the Second City was a much easier book to write since hardly anyone had heard of the Everleigh sisters; no one had any preconceived notions about them. Not so with Gypsy. She was, at one point, the most famous woman in the world, and nearly everyone has an idea of who she was, or who they think she was. So some people end up criticizing the book they think you should have written, as opposed to the book you actually wrote. I enjoyed it, either way; Gypsy was a woman who always inspired passionate debate, and clearly she still does.

What first got you interested in writing about Gypsy?
My grandmother is 92 years old—just eight years younger than Gypsy, who would’ve turned 100 on January 8—and she always told me stories about growing up during the Great Depression. She once relayed a tale about a cousin who claims to have seen Gypsy Rose Lee perform around 1935. The cousin said that Gypsy took a full fifteen minutes to peel off a single glove, and that she was so damn good at it he gladly would’ve given her fifteen more. So this story got me thinking, who was Gypsy Rose Lee? Who could possibly take the simple act of peeling off a glove and make it so riveting that one might be compelled to watch this for a full half-hour?

So I began researching, and I came across a series of articles from the year 1940 about Gypsy in Life magazine. One said called her “the most private public woman of her time.” I thought that was interesting—here’s someone who was primarily known for (literally) exposing herself, and yet she was considered intensely private. Another article expanded on that theme, saying that she was “the only woman in the world with a public body and a private mind, both equally exciting.” Another claimed that she was the “most popular woman in the world, even outpolling Eleanor Roosevelt.” Wow, I thought—pretty impressive. And then I came upon a telegram from Eleanor Roosevelt herself to Gypsy Rose Lee that read, “May your bare ass always be shining.” That was the clincher; I had to write about this woman. I spent three years researching American Rose, research that included connecting with Gypsy’s sister, the late actress June Havoc (I was the last person to interview her) and Gypsy’s son, and also spending countless hours immersed in Gypsy’s expansive archives at the New York Public Library. I became obsessed with figuring out the person behind the persona.

What was the biggest surprise for you?
I was surprised by how incredibly complicated Gypsy was. In the movie and musical, she’s portrayed as this sunny, spunky girl whose success was largely a fluke. But in reality Gypsy was nothing if not calculating. When the moment came, when the opportunity presented itself, Gypsy seized control and wholly reinvented herself. There’s a scene in American Rose that portrays the moment Louise Hovick (Gypsy’s birth name) becomes Gypsy Rose Lee: “In that moment Louise Hovick traded in the last piece of herself, and when she opened her mouth it was Gypsy Rose Lee who spoke. She told the manager that she could fill in for his missing lead, strip scenes and all, and then she sat before her dressing room mirror and met her creation for the very first time.” Gypsy the person had a conflicted, tortured relationship with Gypsy Rose Lee the creation. She was forever caught between her humble roots and her ambition to be accepted by New York’s cultural and literary elite. (My favorite example of her dichotomy: she attended opening nights at the Met wearing a full-length cape made entirely of orchids, but backstage, for the amusement of her burlesque friends, she performed very naughty tricks with her pet monkey.) For all of Gypsy’s mental fortitude and steely nerve, she was physically weak and oddly susceptible to illness. “The body reacted,” June Havoc told me, “because the soul protested.” Taking just one aspirin could upset her stomach, and she suffered from severe ulcers that made her vomit blood. She adored her creation because it gave her the things she’d always wanted—fame, money, security—but she loathed its limitations, either real or perceived. She lived in an exquisite trap she herself had set.

How have readers responded to this depiction of Rose, compared to how she’s portrayed in the musical Gypsy?
In the musical and movie, Rose is portrayed as an ambitious, slightly eccentric woman who desired fame and fortune through her daughters—but within limit. In reality, Rose Hovick had no limits, and readers always have a strong reaction to her. The Hovick women’s family dynamic was the most fascinating part of my research. I spent hours at Lincoln Center looking through the correspondence between Rose, Gypsy, and June, and the letters reflected a constant whiplash back-and-forth of emotion between the three of them. Rose would blackmail Gypsy about her early days in burlesque and threaten to reveal her “true nature” to the press, and in the very next letter beg for forgiveness and tell Gypsy how much she loved her. Gypsy knew about all of Rose’s secrets, as well—including where the literal bodies were buried. It was a codependent relationship that neither one could relinquish. There’s a line in the book that sums up their relationship: “It is a swooning, funhouse version of love, love concerned with appearances rather than intent, love both deprived and depraved, love that has to glimpse its distorted reflection in the mirror in order to exist at all.” As for Gypsy and June, I believe there was friendship and love there, but it was incredibly fragile. When I interviewed June, she told me that she was “no sister” to Gypsy; she was nothing but a “knot in her life.” She lived with that hurt until the day she died.

You’ve been a supporter of the burlesque scene in New York for awhile. Would you like to comment on that?
First, thanks for saying that! I’ve been a fan of burlesque since I first saw you perform with Dames Aflame in Atlanta back in 2007, and it was thrilling to learn more about the New York burlesque scene when I moved to the city. I have so much respect for your talent and art (I always tell people it’s not nearly as easy as it looks!) and I’m grateful that you’re all keeping Gypsy’s smart, sassy tradition alive.

Do you think you’ll continue to write about women of debatable virtue?
Absolutely—my next book is set during the Civil War and tells the true story of four very different, daring women who risked everything for their cause. I know that description’s a bit vague, but I’m in the very early stages of research and don’t want to give too much away. But I’ll always be drawn to morally ambiguous characters, especially when their stories take me back in time.

Your ticket for: A Quickie with Karen Abbott

A Quickie with Karen Abbott