Ann Corio was born in Hartford, CT in 1909. At fifteen, she began secretly performing in burlesque as a chorus girl. Her Catholic mother resisted at first, but after seeing Corio perform she consented, “Just so they look-a, but no touch!” By 1936 Corio was a star in the Minsky theaters in New York City, drawing a star salary during the depression. At the time, there were distinct lines of business for dancers: the chorus and featured strippers and teasers, strippers undressed down to a g-string and pasties, but the teaser “She is always about to undress, but she never completely fulfills the promise of her eyes and hips,” wrote David Dressler in a 1937 study of New York Burlesque. Like her contemporary Gypsy Rose Lee, Corio was a teaser. Corio claimed never to have done the bump and grind.

As a headliner in the burlesque circuits of the 1930s, Corio was a favorite of Harvard students at the Old Howard Theatre in Boston and Supreme Court Justices in Washington, DC. Corio performed with legendary burlesque comics such as Abbot and Costello and Burt Lahr; she always maintained that comedy was essential to a burlesque show. Although burlesque theatres endured after being closed in New York City in 1937, star comedians and musicians migrated to radio and film and live burlesque focused increasingly on striptease dance. In the 1940’s Corio left the burlesque circuits, claiming that the shows were increasingly lewd and less professional. 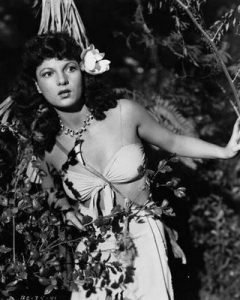 From 1941 to 1944, Corio starred in five low-budget, jungle-themed action movies. The films received bad reviews and Corio later distanced herself from the low-quality films, claiming: “They weren’t released, they escaped” and “They didn’t want them good, they wanted them yesterday.” As fiercely patriotic as she was proudly of Italian heritage, during WWII Corio posed for pro-American magazines such as “Yank,” the weekly magazine of the US Military.

After her disappointments in Hollywood, Corio returned to the east coast and worked as an actress in straight plays throughout the 1950s. Corio became a fixture on the “straw hat circuit” a circuit of summer stock theatres, playing sultry roles like Maggie in “Cat on a Hot Tin Roof” and Princess Kakilima in “The Barker.” During one of her appearances as Maggie, Corio inspired a young theatre producer who encouraged her to star in a burlesque revival show.

Ann Corio and Michael Iannucci debuted “This Was Burlesque” in Boston in 1961 on a shoestring budget with few investors. Their self-produced show moved to the East Village in New York City in 1962 and became an eclectic hit, drawing busloads of female audiences, tourists and students. Corio and Iannucci (who became her third and final husband) produced different versions of “This Was Burlesque” for nearly thirty years, training new dancers and working to preserve the routines of burlesque comedians. “This Was Burlesque” appeared on Broadway twice, toured across America, inspired theatrical imitations and television specials, and was recorded two times by the fledgling Home Box Office. In addition to directing the show, Corio wrote a pictorial history of burlesque with Joseph Dimona and released two albums titled “How to Strip for your Husband,” featuring an instructional booklet and horn-driven jazz orchestrated by Sonny Lester.

Ann Corio’s last public appearance was in 1993, as the guest of honor at “Burlesque Tradition and Transgression” an academic conference hosted by UCLA. Corio died in 1999 near her home in New Jersey. Feature articles and obituaries appeared across the country, in cities where she danced and was loved. Although Corio did not live to see the burlesque revival, the modern movement owes much to her efforts to preserve the theatrical techniques of the early twentieth century. Ann Corio is still celebrated at venues such as the Ann Corio Lounge in Boston MA and at Corio at restaurant and nightclub in New York City where the long-running show “This Is Burlesque” (staring 2008 Miss Exotic World Angie Pontani) takes its name from Corio’s famous revue.

Your ticket for: Ann Corio