November 20, 2010
No comments yet
Articles & Interviews

Anna Fur Laxis blew me away with her clever Bettie Page tribute at The Windy City Burlesque Festival last April. With the amazing transitions from Bad Bettie to Good Bettie, I thought she was just the dame to interview for my costume column. You can check out her amazing act here: Anna Fur Laxis on YouTube

1. What is the importance of costuming to the burlesque performance? Do you come up with the act or the costume first?

The costume is central to my performances, completely fundamental. I probably spend more time than is healthy on getting everything exactly how I want it!

The act comes first, in the past I’ve had what I thought was a killer outfit and tried to build an act around it, but I’ve found that this tends to lead me into a dead end and ultimately limits what the act can be. Nowadays I’ll usually have a pretty clear idea of the full act then design the costume around it. That allows me to be much more creative with the design of individual pieces and really have fun with how they’ll be removed.

2. When did you realize that your costumes had to be custom made and not off the rack? 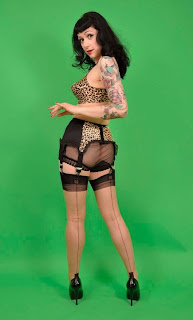 Right from the start really. The first routine I put together initially used an off the shelf dress and I wanted a more visually interesting way of removing it, and I’d been sewing and dressmaking for many years so the idea of altering items wasn’t too intimidating. I put a zip in where there was none and I realised if it unzipped in reverse it would look different and help me remove it, things have just grown from there. I love watching performers who seem to effortlessly disrobe, where their movements don’t give anything away and you’re left wondering how they did it. I strive for that and custom items definitely help.

3.What inspirations do you draw from?

Anything visually arresting really, I don’t have a signature style that I stick to so I can borrow elements from lots of sources depending on the theme of the act. Variously, inspiration has come from the worlds of burlesque, showgirls, cinema, pin up, fetish fashion, magic theatre, carnival….anywhere that’s interesting, fabulous and glamorous!

4. Do you get inspired from vintage burlesque photography, movies or performers?

There’s an incredibly rich heritage to this industry and the many books and internet sites cataloguing the legends are invaluable references and sources of inspiration.

5.What are your favourite costumes that you’ve made? What was the most challenging?

The good girl/bad girl Bettie Page outfit is my current fave. I wasn’t sure it would be possible to do it properly, but once the idea had taken root I knew I’d just have to do whatever it took to realise what i could see in my mind. I really enjoyed the process of designing and making it and now it’s so much fun to perform, I love how everything comes off.

My most challenging was my goldfish dress, an orange sequinned number. Again, it was the product of a challenging blueprint that my sadistic imagination unleashed on me one time, possibly after one too many cups of tea. It was my first experience with a heavily sequinned fabric and I realise now that I hadn’t adequately prepared. It required so much more work to do every little stage and there was less enjoym 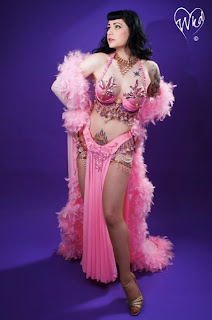 ent and more frustration as the process went on, and we were knee deep in sequins for months! Having said that, I love the costume now, but it was a painful process.

6. What is the funniest thing that has ever happened to you while
making something?

Sequins seem to end up everywhere somehow, even in bed. My husband went to work with one stuck to his face, I found that funny at the time!

7.What materials do you get the most excited about working with?

8. Explain the importance of closures and fastenings on costumes for the burlesque artist?

Closures and fastening are very important, the whole act of seamless clothing removal can stand or fall on the type of fastenings you use. There’s a lot of stuff to experiment with and you need to find out what’s out there to be able to use it, but it’s great fun, for me it’s arguably the most fun. I love the creative challenge of tailoring the garment to the act and using different hardware allows you to make your routine unique in a way few other things can.

9. What was your most bizarre costume? Discuss.

That would probably be the coalmining ponygirl costume. The show’s theme was based on the cultures of Northern England, an area steeped in a history of coal mining, so I became a pit-ponygirl, it was quite surreal, I had full latex ponygirl outfit with hooves, bridle and a plume headdress, but also a hard hat, and pickaxe, and a canary in a cage. It was a moving piece dealing with the themes of alienation and impotence that gripped the communities in The North in the 1980’s, when the coal industry collapsed in the economic upheavals that plagued Britain at the time, then I took my clothes off, there wasn’t a dry eye in the house. 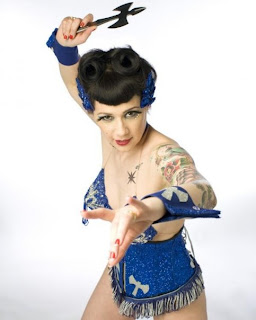 10.What tips can you offer those who aren’t crafty?

Give it a try, start small by embellishing a bra or knickers, it doesn’t have to be a huge project. Try to imagine what will look good onstage under the lights and experiment with textures and colours. Don’t be put off if it doesn’t go to plan, a certain pair of knickers took me four attempts to get exactly how I wanted, with much colourful language on each walk back to the drawing board, but there’s a huge sense of achievement in creating the smallest unique costume part, just give it a try.

11. If you had an unlimited budget what would you make? The sky’s the limit!

Oooh clever! I’m not giving out any clues! I’ve got a few ideas for pretty over-the-top routines which would probably take lottery wins to bankroll but you never know what life’s going to bring you, they may see the light of day sometime, I’d like it to be me who unveils them!

12.There’s a recent insider controversy about how many Swarovskis one can put on a costume.

I haven’t heard about this controversy! It can’t have reached these shores yet, do tell! Swarovskis are lovely though aren’t they? Seriously, I mean look at them, sooo sparkly. Mmmmmm… From that point of view I can see how for some people more equals better, ultimately they can’t disguise an uninspiring act though, no amount of them.

A performer needs to totally own the outfit, they need to look completely in control of procedings. Most costumes will malfunction in some way at some point, the key is to practice and familiarise yourself with an outfit so that you can deal with it, so the audience would never know, or at least go with it. The fuel is that absolute confidence in your ability to perform the routine in that outfit, everything else that the routine contains, the charisma, humour, charm, sass or heat, is a product of that confidence.

14. What designers do you enjoy working with?

The only designer I have used regularly is Booby Trap Corsets, they’ve made some awesome corsets for my routines and I just know that when I need something spectacular they’ll do me proud. Other than the corsetry though, I don’t tend to collaborate much for my costumes. My requirements are often autistically specific and I’ve found it difficult to get across to a designer exactly how a piece needs to work. Often there’s a lot of tweaking and modifying (and starting from scratch) required so it’s much quicker and practical to be able to make those changes myself.

Your ticket for: Behind The Garter Belt: Anna Fur Laxis