Every year, I gallop out to Vegas with three rambunctious questions bouncing around in my belly:  What new and exciting performers will I get to see for the first time? Will I make any money on the craps table?  And, how much time will I have to hang out and talk smack with the Legends?  Because let’s face it—those of us immersed in the burlesque world spend a lot of time watching women take their clothes off, but not nearly enough time hearing racy stories from our elders.  THIS is why we’re here. 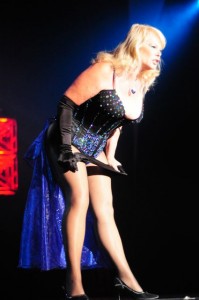 Which reminds me.  Have I ever told you how much I love Tiffany Carter?  Yeah yeah, she’s a sweetheart, she’s sweet and kind and fun to hang out with and blah blah blah—whatever, she’s fucking hot!  Tiffany blew the show out of the water in the first five minutes with her tribute to—wait for it—“Breakfast at Tiffany’s,” introduced by none other than the glamorous Perle Noire.  (Now there’s two pieces of jewelry I’d like to have around my neck.  [Rimshot.])  In simple moves, basic sashays and twirls, Tiffany dominated the stage, hand out, now pushing hair up behind her head, letting her hair down with such flash and glamour—seriously, it is the simple, classic moves that, when done right, send shivers up your spine.  She opens her robe to display a glittery purple lining, and as the music shifts, bumps it.  Does a side zip tease and peels down to a sparkly black corset with a purple train, and then that oh-so-alluring move of pulling off a glove and stretching it over her thighs, bending just enough to create the hint of a lap.  Bumping it in earnest, she really takes her time with the corset.  The music ends with a “that’s all” and she struts off in black next-to-nothings.  YIKES!

The producers this year added the BHOF Weekend Walk of Fame, which read as an effort to get more legends on stage to be recognized while allowing some different legends to perform, and also keeping the show—mercilessly—under four hours.  I approve.  The Walk of Fame, a pageant-style brisk tableau, featured April March, Big Fannie Annie, Dee Milo, Ellion Ness, Georgette Dante, Gypsy Louise, Holiday O’Hara, Lottie the Body, Tammi True, Val Valentine and Viva la Fever, and barked by Bob “Rubberlegs” Tannenbaum.  While I was sad to miss these wonderful performers (Dee Milo!!!), it was great to meet some whom I’d never seen on stage before. 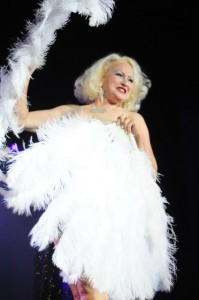 Like Camille 2000, who hadn’t been on stage in 25 years, and returned like winged victory, literally rising up out of the trap door in the stage with big white fans raised proudly like wings above her head.  Strutting in an almost copper-colored sparkly corset, following the advice my grandfather always had for his daughters, to “stick your tickers out,” tall and blonde and magisterial, she proved that it can all be done with the extension of gesture, and that after all, it’s all in the bump and grind.

Haji, like blue lighting, took the stage in a silver coat and black and white-striped devil horns growing out of her head.  Her strut pre-empted the music—“Black Magic Woman”—and by the time she turned downstage we were already gawking.  In simple stage trickery, her fan was silver on one side, gold on the other, so with every flip we were drooling.  It was all shoulder swagger, all suggestion, all “go-to-hell.”  The second piece was “Twist and Shout”—the Isley Brothers version, which she and Tura Satana used to dance to at a club after work, just for fun—and she spun and spun, costume pieces flipping and flying off.  Trixie Little, sitting next to me, clapped with glee:  “She’s SO L.A.!”

And seeing these younger performers get off on their forerunners is half the joy of this night.  Watching legend Holly Carroll sing in a glamorous white coat, purring with a bassy, rolling voice that never quite dipped into the gravel-laden, I noticed that Kellita—fucking Kellita, a hoofer if there ever was one—was staring, just open-mouthed STARING at those legs.  Witnessing a multi-generational moment like that is just priceless. 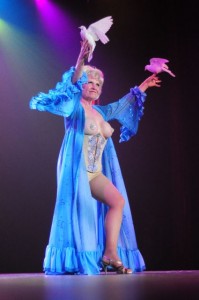 Kitten Natividad claims she did TV and movies to make a name for herself so that she could just be a stripper, and I’m inclined to believe it.  I love her simple and obvious methods: rubbing her own ass, pushing her hair up, literally pumping her tits as she walks—she’s fantastic and over-the-top, bottle-blonde, stacked as all hell, and with a big, toothy grin, she spun in a feathered robe and had us from there on in.  Toni Elling was as hypnotic as ever in a flowered white dress and a robe that was bright pink on the inside—her attitude never flags.  And Dusty Summers conjured a dream to Nina Simone’s “Feeling Good,” making doves appear from nowhere and sending them right back.  And the always tantalizing Gina Bon Bon gave us a heartfelt, energy-infused, popping cubano routine—after claiming that it would be her LAST time on stage.  I sincerely, from the bottom of my heart, hope that that’s not true.

But it was the surprise appearance by Canada’s Grand Beaver, Judith Stein, that sent the light fantastic into my cold, dead heart.  In a rainbow-striped suit and a 20s straw hat, she lip-synched a cane dance to “Sam, You Made the Pants Too Long”—and, yes, her pants were too long.  About her height once again too long.  Strutting anyway, kicking up the excess, it was hilarious and valiant, but she finally unzipped them, which took about a half an hour.  Finally, on the edge of the stage she gets out of the pants, stripping to a tiny red top and panties, and demanding—demanding—howls from the audience.  She had us, man, she had us right where she wanted us.  She spun a little umbrella act and ripped off her panties to her tinier G-string, finally stripping to red pasties and getting a full house standing ovation.  I’ve never seen Judith before, but I can’t wait to see her again—her natural sense of humor almost belies her inherent sexiness, so that by the time she steps offstage you’re really not sure which you’re feeling more—turned on or cracked up.  Oh, AND she can drink, but you didn’t hear that from me. 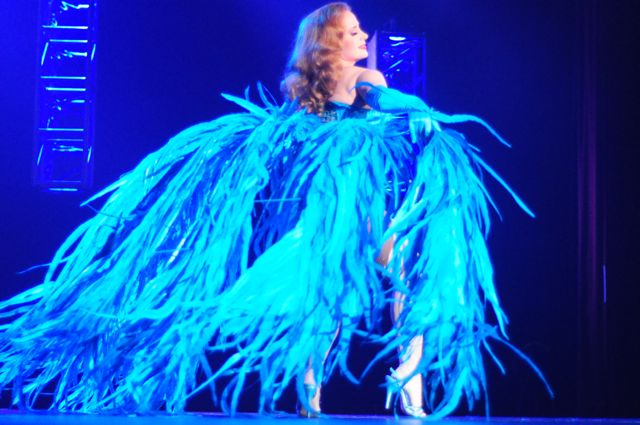 And giving us a nice counterpoint in the “contemporary” school to what can be done with sheer, unadulterated skill (with beauty added, of course) was a special appearance by two-time Miss Exotic World Catherine D’Lish, who dominated the proscenium in a HUGE peacock bustle, spreading the tail.  It’s so big, so splashy, so following David Byrne’s dictum that “everything on stage should be bigger than in real life,” that it was like having my feet cut out from under me when I saw what she could do with a simple gesture:  sweeping her hair over one eye.  CRUSHING BLOW.  Her legs, her arms, the direction of her look—this woman is a master at controlling the flow of the eyes of the audience, something she and Jo Boobs have in common that I’m always trying to nail down and… get distracted, because I’m looking where they want me to look.  Like trying to spot the skill in a Raymond Chandler novel… inevitably, you get sucked into the plot.  Her bustle was off in a snap, moving to Esquivel’s “Besame Mucho,” swinging the tails to her corset lace like bolos, and then using giant, oversized peacock fans that were more the dimensions of Central American fern fronds.  Big slow swoops, and a big reveal.  And a second big reveal—in PROFILE.  Who does that?  Oh, Catherine, that’s who.  Watch and learn.

Just like the Oscars, we were hit with a tear-jerking “in memoriam” slideshow, which was both sad and uplifting—uplifting to know that these Legendary women would be remembered.  Like my photographer says—“Every year, I just spend all night on Friday crying.”  There was a special award for BHOF backbone Laura Herbert, and the  Shanghai Pearl presented the 2011 Legend of BQ award to Barbara Yung, “China’s Most Daring Doll,” who entered in true imperial glamour, with a block-long pink train and her husband in attendance, giving us a respectful, ingratiatingly low bow. 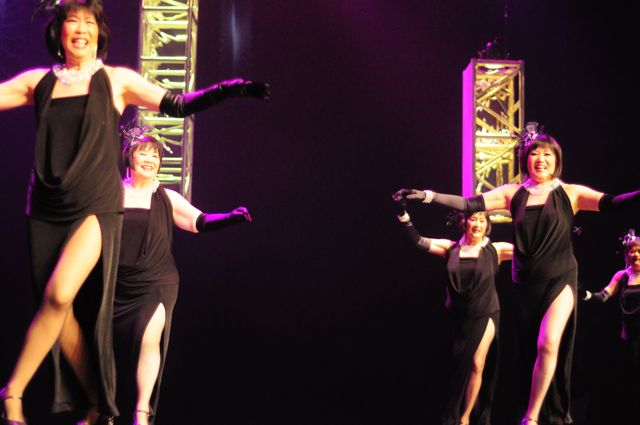 Wrapping it all up was the delightful troupe the Grant Avenue Follies, whose name alone will tell you they’re representing San Francisco’s Chinatown.  This troupe of Chinese-American ladies all in black did a nice unison slow tap, a soft shoe that was simply wonderfully relaxing and infinitely charming.  And all I could think was, none of the no-talent bitches from that multi-million dollar “Burlesque” movie could do unison half this well.  But, then, that’s just the kind of thoughts I have when I’m truly happy.

JD Oxblood is a co-creator of BurlesqueBeat.com, which covers burlesque shows and features an international burlesque event calendar.

All photos ©2011 Melody Mudd. Contact melodymudd@gmail.com for permissions. Performers may use shots for promotional purposes, but please credit properly with photographer’s full name and a link to this piece. Performers who would like hi-rez images, get in touch.