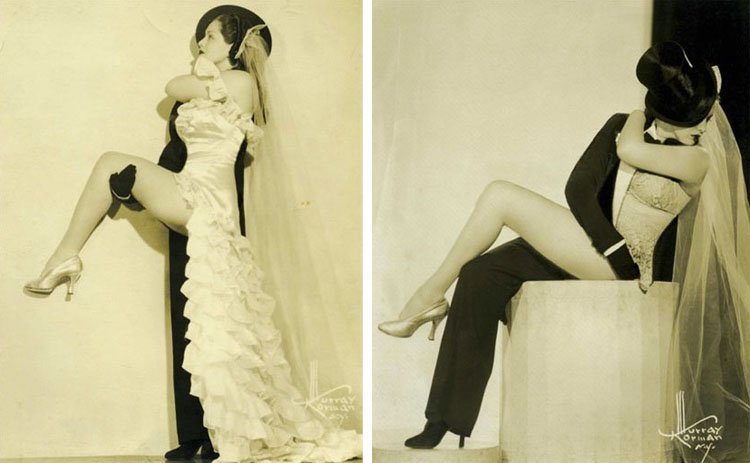 While I’ve yet to find conclusive proof of its origin, the Half-and-Half—in which a solo performer utilizes clever, vertically divided costuming and skillful choreography to create the illusion of a duet—has long been a staple of classic burlesque performance. Most commonly associated with dichotomous male/female numbers (like Zorita’s racy “Bride & Groom,” top), countless interpretations of the theme exist, including a wide variety of abstractions on Beauty and the Beast, from the ridiculous to the sublime: Devil/Angel,  Lion/Tamer, Savage/Virgin, etc. More on the history of the Half-and-Half, courtesy of Frank Cullen’s Vaudeville Old and New: an Encyclopedia of Variety Performers, Vol. 1:

“Almost always a dance act, in a half-and-half act, a solo performer was costumed and made up to appear as both a man and a woman. He appeared male as he faced the wings on one side of the stage and then female as he turned toward the opposite side of the stage—like two sides of a coin. The demarcation line was drawn down the center of the face to the crotch. If it was a dance act, the male side might wear half a tuxedo or bolero costume (one arm and one leg) and half a ball gown or blouse and skirt. As the performer danced, he made sharp, quick turns, keeping the profile toward the audience as much as possible to foster the illusion of two people dancing together. A variation on the half-and-half dance act was to have a solo dancer with a flexible dummy. The dancer held the dummy by the hands and arms and the dummy and the dancer were attached only at the toes so that their steps seemed coordinated. Although this was occasionally performed as a serious dance illusion, it was far more often a comedy act in which the flexibility, even floppiness, of the dummy permitted grotesque movements and wild gyrations. It was rare but not unknown for a half-and-half performer to do a comic dialogue act. Rather than dance, the performer would pivot in position so it appeared that the man and the woman were exchanging questions and answers or quips and insults.”   Of course, just because the Half-and-Half is an archetype, doesn’t mean it has to be typical. Just ask Maxine Holman (above right; the pretty blonde, not the wolf) or neo-burlesquer Little Brooklyn, whose delightfully irreverent takes on the concept are anything but ordinary.

Your ticket for: Performance Archetypes: The Half-and-Half