Looking Back: Miss Exotic World #1 in the LA Times 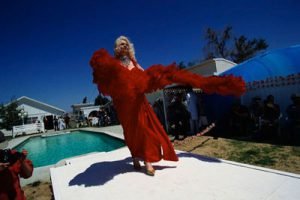 Zebras and llamas and topless Santas, oh my! What a find–and what a time to find it; just came across this gem on the Los Angeles Times website and had to share it. We have the original in the BHOF press book, so I will scan and post the accompanying photos as soon as possible…


A large woman with impossibly black hair and fingernails nearly as long as her cigarette is taking care of business. She is the vortex of a tornado of almost-dressed women, the calm center of a swirling assortment of ladies in breathy peignoirs. Her mission is to impose order upon the chaos. It is for her, Sheri Champagne, to find striptease music for an entire bevy of strippers.

“Honey, I need your name and your music.”

Champagne’s attention is fixed on a perfectly round woman wearing a filmy black thing and a vacant look.

Champagne asks Doll how old she is, but Doll takes off in a huff of lace. Champagne looks up. Her ruler-straight eyebrows connect in consternation to form a perfect V. This is one bugged stripper.

“Here I am, the mother of four grown kids and 10 grandkids, and they can’t tell their age,” says the woman who was once grandly known in select circles as America’s First Lady of Champagne. “Over 50,” she harrumphs, scribbling on a hot pink sheet of paper next to Doll’s name.

Everywhere you turned last weekend there were girls, girls, girls, here at the 34th annual reunion of the Exotic Dancers League of America, where age was only a number–and sometimes not even that. The time had come again when strippers with great stores of experience gathered from around the country at an obscure pinpoint in the California desert, 2 1/2 hours northeast of Los Angeles. Their annual pilgrimage ended Sunday at Exotic World, a bundle of disconnected buildings housing celebrated G-strings and pasties.

But this year was different. This may have been the 34th reunion of this merry band of strippers and the fifth at Exotic World. But it was the first under the helm of Dixie (the Marilyn Monroe of burlesque) Evans, museum curator in residence.

In Dixie’s fondest dreams, old strippers would come to Exotic World to park their G-strings in perpetuity. “We’ll put up mobile homes,” she says sweetly. “If anyone wants to retire, it would be the Lawrence Welk Village of burlesque.”

But that is then, and this is now. And Dixie, 65, is reaping the rewards of another Exotic World first–she has modernized the publicity machinery around the reunions. This year, she has sent out an actual press release touting the unveiling of the first Miss Exotic World who, she promised, “will take her place beside Miss Budweiser, Miss Pickle and Miss America.”

This temptation proves irresistible for certain segments of the press, who are threatening to outnumber the strippers. “Entertainment Tonight” is here. So are Playboy and “A Current Affair,” Los Angeles TV stations and national tabs.

At a bench by the pool, a clean-cut young man is interviewing a blowsy woman in a phosphorescent orange cape. “I did tassel twirl and muscle control,” she tells him and demonstrates, pressing her pecs.

“Is that hard?” he asks earnestly.

“Not if you had the muscles.”

There’s Flame O’Neill, who got her start at L.A.’s Follies Burlesque 45 years ago. And then there is Mitzi from Miami, who is still shaking it up for the condo crowd at the well-seasoned age of 73. “I haven’t given it up,” she says, her big blue eyes getting even bigger. “Why should I give it up?”

After much purposeful milling about, the strippers line up for the main event–a pageant-like procession of women taking it off, but not all of it off, under strict orders from Dixie. “This is a legitimate affair,” she says primly.

One by one, they bump and grind around the Exotic World pool, while Champagne emcees, offering the occasional bit of advice. When 43-year-old K. C. starts shaking it in a cowboy hat to some country-Western tune about a traveling man, Champagne proffers: “Shake it, but don’t break it, baby doll.”

When Dusty appears with gold-flecked toilet accessories positioned on her bosom, Champagne remarks: “Look at those plungers.”

“Tell me,” says Johnston, “around the campfire, did the Indians do a burlesque type of dance for the cowboys?”

Carloni tells him Indians danced, but not burlesque. Then she talks ethereally about the wolf being the spirit of the Indian.

“I don’t have an act,” insists Carloni.

Carloni, who tends a preserve in Lucerne Valley called Wolf Mountain, goes on to talk about her canine calling. “My mother told me my summons in life was to take care of the wolves,” she says gravely, “because when wildlife is gone, we are gone.”

“So we can’t get a dance out of you and your wolf today?” Johnston says.

Later, Johnston explains that he publishes a magazine called “Prime: The Sexual Passions of Older Women,” which he likens to “Playboy for the geriatric set.”

That would place him in prime Prime territory, although the day’s honor will be reserved for the rare stripper here under 30. Three men are hastily lined up by Evans to judge the aspiring Miss Exotic Worlds.

Toni Allasdrini, who briefly sported a devil outfit down to her red butt-high boots, won the top honor based on her costume and performance. By the latter criteria, the honor probably should have gone to one of the runners-up, who had the press buzzing with the rumor that she was a he.

“We discussed it for hours,” Evans said later. “We were all in total shock.”

It isn’t all Fellini-esque at Exotic World.

There is also the stuff of reunions, plenty of pure unadulterated nostalgia. It is everywhere, on the walls plastered with the photographs that have made Exotic World–which is open to the public–home to the Strippers Hall of Fame for seven years. There are stripping stars like Camille 2000, Venus Angel and Exotic World founder Jennie Lee, the Bazoom Girl and Queen of the Educated Torso. Not to mention Ronald Reagan.

“You probably want to know what Ronald Reagan and Jennie Lee had in common,” Dixie purrs. “They were both presidents of the American Guild of Variety Artists.”

Evans is waiting for Blaze Starr to send her smoking couch. And for Tempest Storm to donate a G-string. “I hope it’s a diamond one.”

But she’s particularly proud of a heavy manuscript bound in hot-pink paper that she says is a University of Alaska dissertation on burlesque’s impact on culture since its heyday in the ’40s and ’50s. The author “thinks–and I do too–that (burlesque) will go down in history as the Renaissance era of the U.S.,” Evans says.

She’s also pleased that a college student from Bowling Green, Ohio, interviewed her at length about her profession for a paper on an, ahem, unusual occupation. “He got an ‘A’–the only ‘A’ I ever got.”

Dixie instructs: “There used to be a girl in New Orleans who had two little bird cages hanging on the ends of her bosom. She’d say she had the two cutest ‘keets in town. If you wanted star billing, you had to go that extra mile. You needed a gimmick. We had to fill the theaters and we were fighting TV every inch of the way. TV won, of course.”

Dixie bemoans the current emphasis on strip–when it used to be on tease. “We had trumpets and sax and you had the drummers giving you rim shots. You could tell a story. Just to take your clothes off doesn’t mean anything. You have to have a rhyme and a reason.”

The women who keep returning to Exotic World are like-minded, burlesque-loving women like Jeanine France, 62, who has toasted the old days for five years of reunions. France says the last reunion was the best of the lot. But then consider the lot.

“One reunion was at a bathhouse in San Francisco because Jennie Lee knew the man who was managing it,” recalls France. “That one was weird. Our audience only had towels on.

“How do you do a striptease for people who aren’t dressed?”

Your ticket for: Looking Back: Miss Exotic World #1 in the LA Times

Looking Back: Miss Exotic World #1 in the LA Times