We will be CLOSED through the end of NV's Phase II. [MORE INFORMATION]

Finnish beauty, LouLou D’vil looks back on her BHoF 2011 experience… 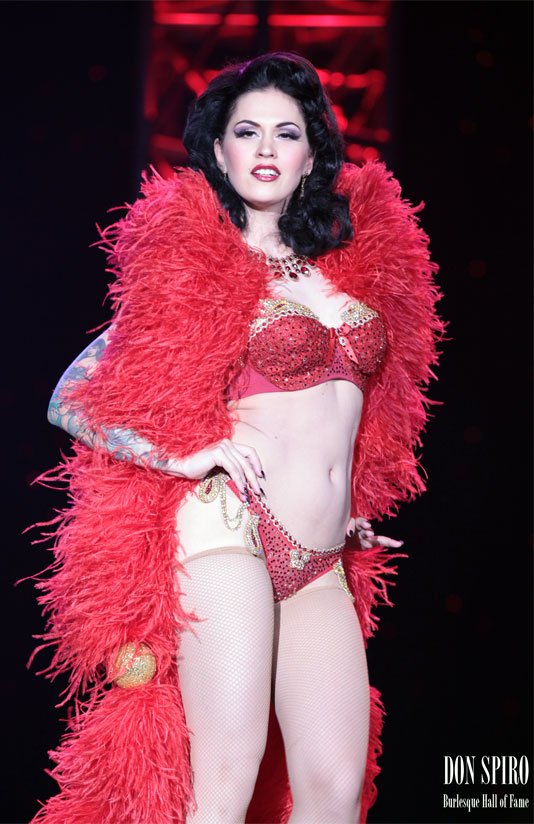 Congratulations LouLou! Did you imagine when you set off from Finland that you would return with a trophy?
Thank you! I really didn’t expect to win, not at all!

Are you keen to return and compete for Reigning Queen? Do you feel ready to take on that category?

Of course, it’s my dream come true and I couldn’t be more thrilled! I’m so delighted to compete in the main category next year and I’m ready for that. There’s still time, almost a year, to develop and get better and better. By then everything will be polished and ready.

Did you enjoy competing? Did it affect or change the mood backstage amongst the debut competitors, or was performing at BHoF nerve-wracking enough as it is, competition or not?

Yes I did, because I didn’t think of it as a competition. I just wanted to make a great show and entertain the audience.  The atmosphere was great amongst the debut competitors and some of us became really good friends! That was really nice to observe because I was a little afraid of how the atmosphere would be – this was my first competition, but no worries! Everybody was so nice, supportive and chatty, just in the way we all should be. I also think that we all felt like winners already just because we were accepted into this category. These warm-hearted people make competing truly joyable.

How did you feel when your name was announced at the end of the evening?

I just couldn’t believe it! First I didn’t even realise that they announced my name and continued to drink my sparkling. It was my boyfriend who told me: ‘You won! Get up there!’ That was one of the best moments of my life.

Why did you choose that particular act? Was it an easy decision? Were you happy with your performance?

I chose my act because I wanted to bring something magical from Finland, so my ‘Magical Winter’ act was the obvious choice. This act is also my first to include a quick change, so I was really excited about it. I was happy with my performance because I was able to hold my nerves and just enjoy performing. I really did feel the connection between me and the audience, and that is the most important thing for me.

Do you feel that things have changed for you as a result of this win? Do you think it gives you more authority as a spokesperson in Finland, or to young, upcoming performers who aspire to similar things?

I think this is a great way to show Finnish people that we can do it too! Nothing is impossible when you have dreams and you are willing to work hard.

Aside from the pageant, which memories and experiences do you particularly treasure from BHoF 2011?

For me coming to BHoF means meeting your dear friends that you usually meet only once a year and you also get to make new ones! Second, and very importantly, is meeting the legends. It’s always so inspiring to see them on stage and off stage and just to be able to talk with them and share ideas, dreams and funny stories. Just meeting and spending time with all these lovely people is the biggest treasure you can have.

What are your upcoming projects and performances?

Next week I will travel to the New Orleans Burlesque Festival and compete for the festival title ‘Queen of Burlesque’. I’m very excited about it because I have never been there and many of my friends will be there too! After that I head to Vancouver for a week. Then it’s time to come back to Finland and start rehearsing for our own production, ‘Grand Tease Show’, which is a month long burlesque and live band show at the glorious Grand Casino, Helsinki.