We will be CLOSED through the end of NV's Phase II. [MORE INFORMATION]

November 7, 2010
No comments yet
Articles & Interviews

In Revealing Images, photographer Don Spiro dishes up sweet photographic treats and the stories behind them. Today, Don aims his lens at New York City based band, Gigi and Pop. 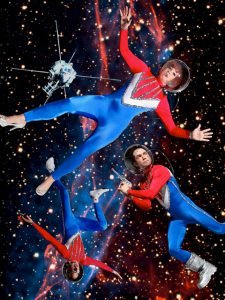 Gigi and Pop are a band based in New York City that is popular in the burlesque scene, it’s individual members have been performing burlesque for years and as a combo have taken home the trophy for the “Best Variety Act” category at the 2009 Burlesque Hall of Fame Weekend. Taro, Anita Cookie and Ken Ball truly define variety, they can perform in any scene in any category.

When they asked me to do a photo shoot with them I knew it would be just as varied. Dark and moody or light and comic? Straightforward representation or fantastic and whimsical? The answer to everything is yes.

Taking a cue from album cover art, several possible looks were discussed. The idea was to shoot plates for compositing into different images. Taro and crew had definite ideas as to the style of the final design of each image, but each would be unique and portray the group in different fashions. Shooting plates is fairly easy, I do it all the time, but usually with a specific final composition pre-visualized and all I would need to do would be to match something already designed. This would be a different challenge, mainly for Taro, who would have to combine the elements into a new whole.

The first set up was to shoot them naked with their instruments and the trophy against a pure white background. Their own trophy was being engraved so they borrowed Julie Atlas Muz’s from 2006. I positioned the lights they way I do for pin up or for shooting Lucha Va Voom, very flattering and good for group shots with little shading and plenty of fill. I shot one test shot to check the exposure. After adjusting my lens I took the first shot and that shot was the lucky one, it ended up the one being used. A simple set up, Taro only had to digitally remove a piece of tape that was holding up the seamless backdrop and change the date on the trophy.

Your ticket for the: Revealing Images: Gigi and Pop