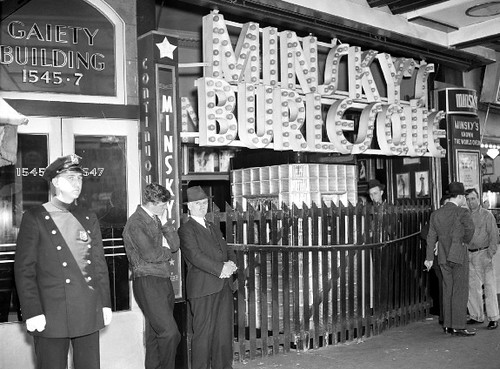 Burlesque signs have always rocked my world. As a child, every time I saw a burlesque sign on a lounge I got an illicit thrill, imagining women of impossible repute removing stockings with a knowing wink. I could picture the heavy lashes, the big hair, the chiffon robes. I was mesmerized. As a teenager, I was excited by the signs on strip joints in Atlanta. I knew that the Domino Lounge was one of the last of the old school burlesque venues in town, but the contemporary signs got me riled up with promise—one day I’d be of age, and I’d know where to go by the signs. A favorite was the sign for Tattletale’s, of “Girls, Girls, Girls” fame—a delicate outline of a nude woman’s hip drawn from the back, her weight on one leg, her hand relaxed at her side, based on this line drawing by Picasso: 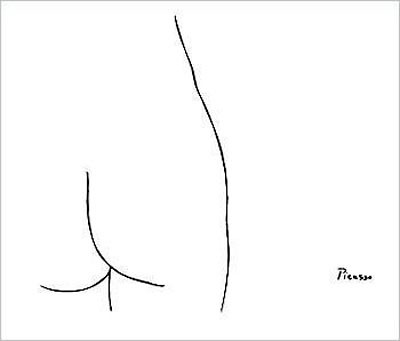 Later they had to take it down, since it incorporated Picasso’s drawing without permission. Bad strip joint! But good taste.In the early 1980s I had started working in those clubs. One of them, The She Club, got shut down for trying to blow up Starcastle, the strip joint across the street. The government took possession of The She Club and publicly stated they would open and operate it, though they never did. I fantasized about them actually doing it so I could work there and tell my mother I was working for the government. For years afterward the big sign that had been posted at the entrance was leaned against a cement wall behind the club, and every time I drove by I coveted that sign. 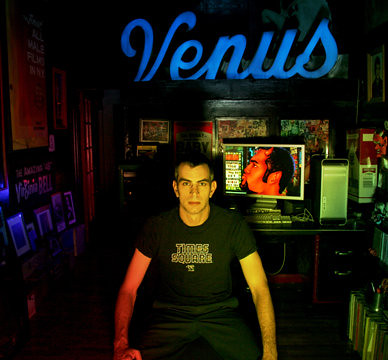 Scott Ewalt, like me, is fascinated by signs. He is fascinated by other things, which I’ll get to in other sections of this interview when I post them later, but I fixated on the collection of signs in his apartment the first time I saw them. I thanked him in the intro to my book—his passion for burlesque legends is contagious and has inspired me over and over. Also, he was the first DJ I worked with at the Slipper Room, spinning some of the best go-go music I’ve ever heard.

Currently he’s represented in the book Dead Flowers, edited by Participant Press and Vox Populi. It’s full of prepunk and postbunk artists that all segueway into each other. The main subject is Timothy Carey, a psychotronic filmmaker; the link between Scott and Timothy is that Lilly Christine taught Timothy his signature dance, which he debuted in a movie called “White Trash,” and Scott Ewalt has done extensive studies of Lilly Christine, including his latest, Which shows Lilly Christine walking in front of a building with burlesque signs on it. Scott also does reconstructions of Times Square Burlesque houses as digital artwork. His eye for the sign is as obsessive as mine, or as any cop perusing the signs on broadway. When I interviewed him about his collection, the signs were by far his favorites.

How did you get interested in Burlesque?
That’s a many layered question. I was inspired by Bugs Bunny, the outro to Bullwinkle, I Love Lucy, seeing the Carol Doda sign at the Condor Club as a kid. Seeing the postwar burlesque houses in San Diego as a kid. A Date with Elvis by the Cramps. Meeting John Sex, Katie K, and International Chrysis. All these things combined helped me find this aesthetic.

How did you start collecting burlesque ephemera?
Paula Klaw from Movie Star News sold me a Tempest Storm Teaseorama poster and from that point on I was equally fascinated with burlesque as with the vintage S/M imagery I had been collecting. It would have been in 1986. 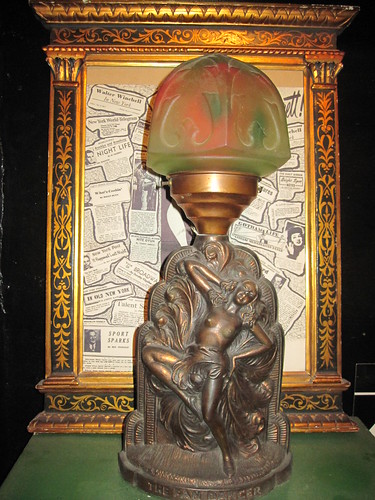 What are some of your favorite items in your collection?
Original Tura Satana lightbox, the Venus and Eros marquee neons, the first all-male burlesk sign ever put on the exterior of a building, my Zorita lifesize cutout, my Liz Renay silver hologram, my lifesize sign of Virginia Bell, the Babydoll Lounge sign, the Billy’s Topless sign, my Patrick the All-American stripper 8 by 10, my Sally Rand fan dancer lamp from the 30s, and my Henry Dixey commemorative coin.

Tell me about some of the signs. 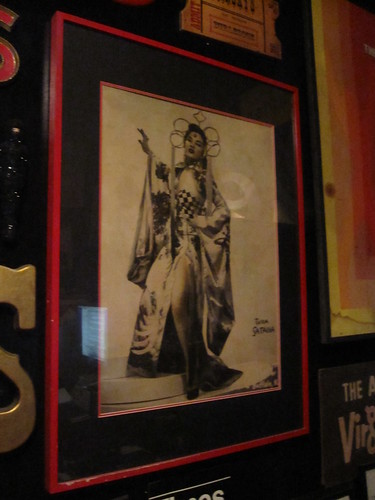 The Tura Satana Light box: A poster store called me and told me they were tearing down the theater next door to them, and when they pulled off all of the signage underneath there was this image of a woman, and when they told me it was Tura I almost lost my mind. It’s from 1957. Buffalo New York. The guy from the store mailed it. He had sold me 24 Jon Voigt posters, the ones that wallpaper my kitchen. When I first met Tura she remembered having lost that sign. She kind of widened her eyes like: “Would you give it back?” and I kind of narrowed my eyes like “No”–I mean, she gets to be her, right? 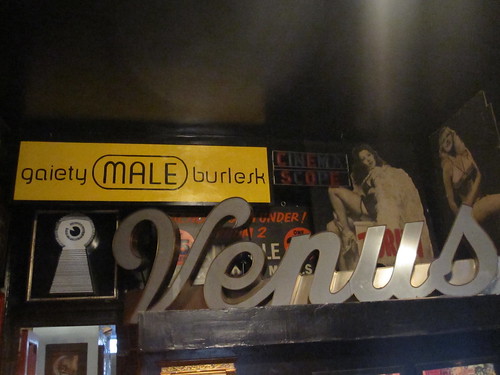 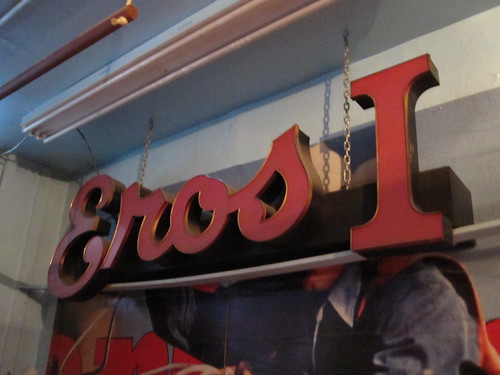 The Venus and Eros Marquees: I lived in Times Square in the late 80s . I was walking home from work one days and they were taking down the Adonis sign and cutting it into one foot sections and dropping it into a dumpster. I tried to stop them and they said if I could take the sign right then I could have it, but my apartment wasn’t even as big as the sign. So it piqued my interest and I realized that there was no effort being made to preserve these things. When Giuliani was closing all the burlesque houses I contacted Chelley Wilson, a grindhouse pioneer and the meanest woman in Times Square. She sold me the Venus and when she passed away her daughter sold me the Eros. They were just happy to have someone get them–it was a ridiculously low price. They were on 46th and 8th ave. 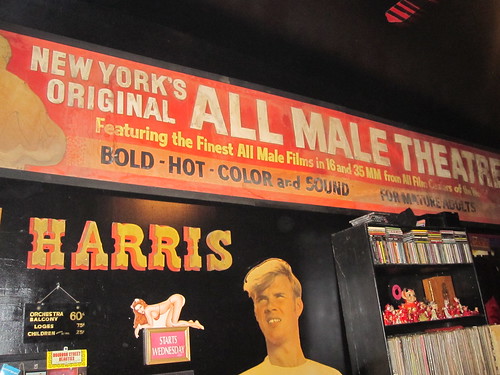 The first All-Male Burlesk sign–that was part of that lot. When I got it home it was about 4 inches thick and I realized it was more than one sign and I cracked it open and there was an older sign from when it was the one of the first gay theaters (three opened simultaneously in the 1960s) in the US.

Zorita cutout–I got it at the Chelsea flea market for 50 dollars. Rode it home on my bike–to cheers from people I passed by! They were cheering when I went by with Zorita flapping in the wind. Was it 1994? I never got to meet Zorita unfortunately. I had known about Zorita because I had found some 4 by 3 images of her in a box in the back of an adult book store in Loa Angeles, a store that was a front for a gambling and crack den, that actually had a rotating wall and it turned and behind the pornography were guys gambling and smoking crack.

Liz Renay hologram–Luke and Laura rescued it from her attic and it’s a print plate for her 8 by 10s when I went through her collection; it was something I was allowed to pick for posterity. It was covered with rat turds but of course it’s not anymore. I met Liz after having lunch with John Waters in 1994. He said to look her up she’s in the phone book, tell her I sent you. I flew to Vegas, called her up, and I was there for five days and on the third day she said she had a cancellation for lunch and I could meet her. And I was hooked after that. Her memory was so sharp and she was so sweet. And funny. And sexy! 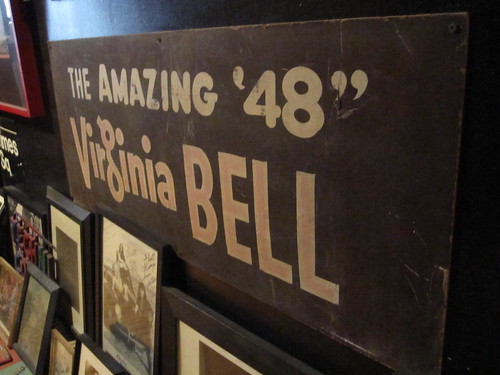 The Virginia Bell Sign: A man called me from Toledo and said he had a sign from the Roxy Burlesque and Vaudeville theater in Cleveland. Irma the Body, Tempest Storm, Blaze Starr–all those signs had been destroyed. The picture he sent me of the theater showed a tractor parked in front of it. His grandkids were getting old enough that they were starting to ask who the naked lady in the garage was. Actually his wife called me and asked if I could buy from him. I had bought some other ephemera from them. 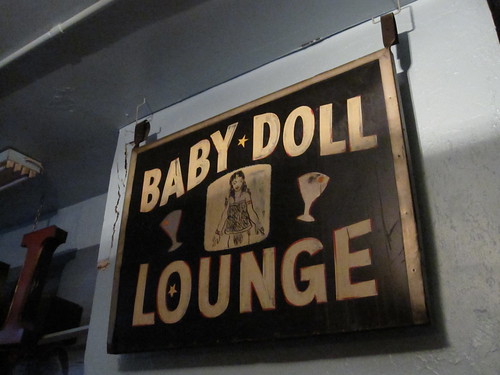 The Babydoll Lounge Sign: I had some girlfriends that worked there. I went to visit them one day and I noticed that the shingle sign was gone. I went in and asked what happened to it and the owner looked at me like I was crazy and asked me how much I had in my pocket. I pulled out two twenties and said that was all I had, and he said to take it. One of my favorite things that attracted me to the Babydoll was the fact that it was across the street from the Mudd Club, and in a classic symbiotic relationship the musicians dated the strippers–Cookie Mueller was there. It’s also the bar where the famous headline “headless body in topless bar” comes from, and it was Janis Joplin’s favorite hangout when it was a Hell’s Angels bar. I love it for the crudeness of the painting. Hand-painting is definitely my ongoing fetish in all of them. They remind me of Stuart Davis paintings. He was an artist in the late 1920s who came from Paris to New York and did paintings of signage, and who is lightly regarded as the father of pop art. 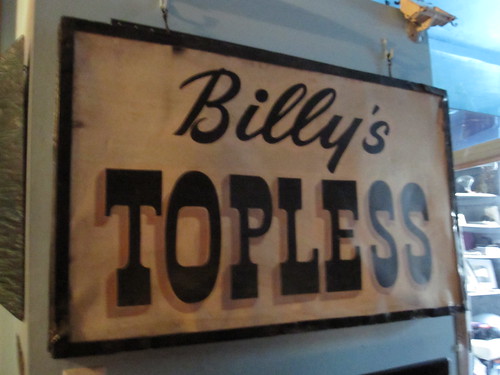 The Billy’s Topless Sign: Billy’s was where the House of Domination all worked during the day, those performers from Jackie 60. One day I was there visiting them and the sign had blown off and I went into the back room and talked to him about purchasing the sign. He was much less green than the other people I had contacted, having worked with people like Gypsy Rose Lee, and he said he knew it was a valuable artifact. He said if Guiliani passed the text amendment that made the word “topless” illegal on the exterior sign of a business, he would sell me the sign for 300 dollars. Three months later I opened the paper and read that Guiliani had passed the text amendment, and I called the owner, and he said he’d been waiting for my call all day. He was able to keep the signs that read across in one line because he moved the exclamation point and made it Billy Stopless, but he couldn’t do that on the shingle sign because it set in two lines.

I’ve been interviewing Scott about Boylesque as well as his involvement with the Burlesque Hall of Fame—lots more to come!

And, if you’ve got any photos of burlesque signs you’d like to share, please do! You can post links in the comments.  –Jo Weldon, Daily Burlesque 12/28/11

Your ticket for: Signs of Scott Ewalt by Jo Weldon (Part 1)