In the first of a series of BHoF Winners Interviews, Indigo Blue shares her thoughts, feelings and future plans as the Reigning Queen of Burlesque 2011… 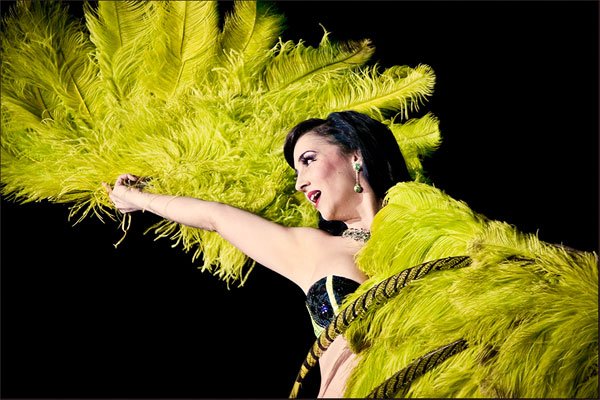 When you were announced, my heart leapt for you – the wave of love and happiness for you in the theatre was so affecting. Did you sense that affection, or were you too overwhelmed?

Thank you so much!  I was pretty overwhelmed when my name was announced, but my mind was actually very clear.  I felt full of emotion and gratitude, and also very calm, all at the same time.

We were treated to some first class Indigo Blue victory clowning, but what was actually going through your mind, if that isn’t too cliched a question?

I wanted to really acknowledge every person in the theatre. I felt so honored, and so grateful!

When you received ‘Most Classic’, and the third and second runner-up were announced, did you think it could still be your year – was it still a possibility in your mind?

Anything is possible at Exotic World!

Can you tell us a little bit about ‘Chartreuse’, and why you chose to perform this act in the pageant?

The Chartreuse costume was inspired by the fabric for the corset, which I found when perusing the LA Garment District several years ago with Adonna Vichet. I was awestruck by the shades of gun-metal blue and chartreuse green together, and wanted to make something arresting and unusual.  I had a vision for the design that I sketched in my journal and took to my brilliant designer, Danial Webster.  Danial was itching to use the quick-release design on the corset, so I willingly became his rhinestoned guinea pig.

“I have always envisioned the title of Miss Exotic World as a job title, wherein she should strive to increase the visibility of the Burlesque Hall of Fame and work diligently to ensure it’s growth and survival…”

(continued…) I created the act itself for the Seattle Erotic Arts Festival performance of “Cabaret de Curiosities”, written and directed by Roger Bennington in 2010.  Roger found the incredible music and I built the choreography from what the music dictated. I decided to submit that act to BHoF because I wanted the opportunity to do a classic act in a gorgeous costume that exemplified my vision of embodied femininity.  I owe a huge debt of gratitude to many of my friends who watched earlier versions of the act and gave me encouragement and suggestions for refinement – in particular Catherine D’Lish, Michelle L’amour, Waxie Moon, Inga Ingenue, and Roger Bennington himself.

After competing for eight years, what does it mean to you to be given this title and recognition?

This was my tenth year attending Exotic World, my ninth year performing, and my eighth year competing.  It feels amazing.  To tell you the truth, it’s still sinking in!

What did you think of this year’s result overall, and the standard of competition?

The competitive field was incredible.  I was especially blown away by the quality of the Debut category.  Really incredible. 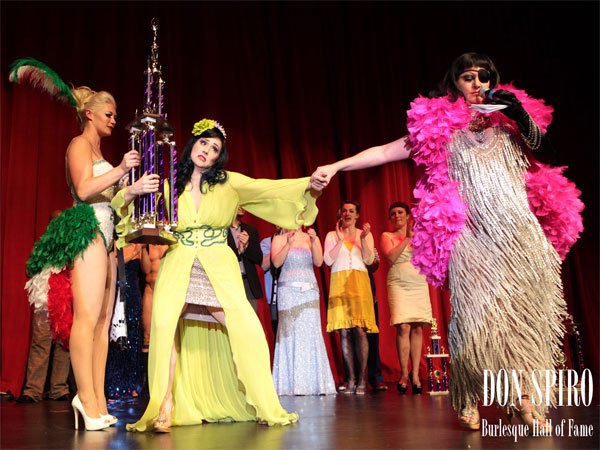 You have already written blog entries and spoken on the radio since the pageant about the significance and importance of Exotic World/The Burlesque Hall of Fame, and what you intend to do as queen to support it and raise awareness. What do you hope to have achieved and see happen or change by the time you hand over your crown in 2012?

I hope that in time for this year’s application process there will be an official set of duties for the next Queen.  By next year, I hope to have continued to raise funds and awareness for the Burlesque Hall of Fame and Museum!

What would you say to aspiring Queens of the future? Would you stress that it’s not so much about winning a title for yourself as how you use it to support BHoF and the wider community?

I have always envisioned the title of Miss Exotic World as a job title, wherein she should strive to increase the visibility of the Burlesque Hall of Fame and work diligently to ensure it’s growth and survival.  There is already a wonderful tradition of this amongst the previous Queens.

Is there anything else you would like to say or express at this time?

Thank YOU and 21st Century Burlesque for your support of BHOF, the Museum, and the larger Burlesque Community!

Your ticket for the: Winners Interviews: Indigo Blue, Reigning Queen 2011