Born in Cuba, Gina Bon Bon began her career in burlesque in NYC in 1965, as a dancer in the chorus line of  the Latin Fire All-Latin Revue. She has since worked clubs and theaters all over the U.S., Canada and Guam, including a co-starring role in Burlesque USA alongside legendary comedian Red Buttons and singer/dancer Robert Alda (Alan Alda‘s dad) and feature engagements with Minsky’s Follies, the Chicago Playboy Club, and Cabaret Las Vegas.

Throughout her career, Ms. Bon Bon has performed with Tempest Storm, April March, Bambi Jones, Chili Pepper, Honey West, Ez Ryder, Dusty Summers and Camille 2000, among other headlining entertainers and BHOF Weekend regulars. She has  worked for such legendary agents as Al Baker Jr., Jess Mack, Dick Richards, and Ross Russell and been muse to  renown costumers including Hedy Jo Star and Bruno the Fantastic. An avid, talented painter, she is also member of the Screen Actors Guild, and can be seen in such films as Coming Home and Fever Pitch. 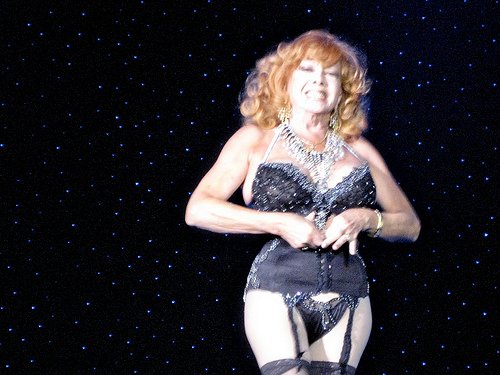 Your ticket for: Gina Bon Bon